We are back from the dark passages below the ground. Although we are no closer to rescuing Matilda (who is my sister) yet, I think that we will soon set off.

…Mosely can turn into a tree,

..Matrim is richer than I knew,

…and my friend Scalrag likes dessert too much for his own goode.

But let me start my tale nearer the beginning than its end. It was when we were with the mushroom folkes that Mosely turned into a tree. I do not know why or how he did this, but I had surely never seen such a thinge before! A tree! Ned sniffed him and seemed pleased. The mushroom folks were very excited too, and danced around him until he changed back again.

After this surprise, came another: the King of the Mushrooms directed to us to a underground river, where three of his folk—Stump, Thump and Stoop—offered to guide us to the surface. We went with them in boates that were not really boates at all but floating mushroom caps. I did not get in the mushroom-boate with Mosely because I was worried he would change again, and old Ben Canope always used to say that while two is company, tree is a crowde. 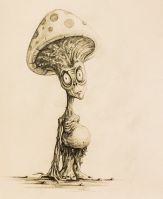 We travelled down the river and eventually arrived in some twisting passages and caves. Our guides seemed loste. I was loste too, so I understood their confusion.

In the first cave we entered there were battes that weren’t battes that swarmed at us and tried to bite us, but with the help of a spell of sleepiness from Fauss we soon foughte them off.

We continued through the passages, as the mushrooms argued as to which way to go. Suddenly a giant black blob appeared before us and struck at Scalrag. The blowe seemed a heavy one, and what was worse the creature seemed to ooze a horrible acide that ate through Scalrag’s very armour!

“It’s a pudding!” cried Scalrag loudly. “Ahh yes, a pudding,” murmered Fauss in agreement. He had been skulking invisibly but now appeared, seemingly anxious to partake of the treat.

I could not see any pudding. I too was hungry, for we had only eaten dry rations and the blessed kibble of Uthgar in recent days. And I like pudding a lot. Matilda makes excellent puddings, using apple and goat milk curds and sugar, However, this did not at all seem to be the time to be thinking of dessert, and I was most puzzled.

Nonetheless, Scalrag launched himself up and over the angry blob in search of sugary sustenance. Pudding! Clearly he liked it a lot!

“Come back!” I cried as I stabbed at the thinge with a javelin. “We can eat later, when chastisement is done!” Duty, after all, is a duty, while gluttony is a sin.

Moments later, Mosely began to strum upon his magical harp and a wall of fearsome flame engulfed and surrounded the blob, blocking our sight.

“It’s alright,” I heard Scalrag call from somewhere on the other side. “There seem to be TWO puddings on this side…” At least he would be well nourished while we fought the blob.

The fire continued to burn, although to what effect I could not see. Ned, Bjorn, and Fauss grew tired of waiting, and set off downe the corridor back the way we had travelled in the hopes of finding another past. It was then I heard Scalrag shout out in alarm:

“Get back, dammit… good ooze, down boy, go find Mosely… DAMN, that HURT.. uhhh, guys, I could really OUCH use OH MY GOD MY HAND IS MELTING some help here!”

Apparently dessert was not going well.

Fearing the worst, I ran through the flames to find my best friend. “I am coming, Scalrag! Have no fear, good will usually triumph!” I shouted in encouragement. The fyre singed me greatly, and my boots began to smoulder. Fortunately the blob had been reduced to a charred goop, and did not trouble me.

I found myself in a larger cavern, with no sign of Scalrag. Two more of the dark blobs were oozing their way to the north. Could they be chasing him? I threw my javelin at the nearest, and it veered from its slimey path towards me. I drew another.  Moments later, the fyre behind me died down, and Mosely and Jandar joined me in the fyghte. Matrim and Fauss showed up a little later, as did Ned. Bjorn, however, was nowhere to be seen.

As I blocked the creature’s attacks with Ned—my great shield, not my sister’s big black dog—my friends and I had at the blob with spear and arrow, and spell and incantation. It finally quivered for a last time and collapsed upon itself with a putrid, bubbling sigh. For all the talk of dessert, I was even less hungry than before.

“ENOUGH!” shouted a loud voice, and a clap of thunder echoed through the cavern and passages. Somewhere behind us Bjorn had had enough, but I knew not where or of what. Too much dessert, perhaps? If I had time to think I would have regreted that I had found only murderous blobs of black and none of the puddings that seemed so plentiful. However, Scalrag was still in danger, and we must hasten to save him.

We ran onwards to where the last of them had slithered down a rocky corridor. The horrible and vile thing attacked poor Ned, knocking him down! I was filled with a righteous rage and charged at it, using my shield to push it back from my defenceless companion. Behind me, Mosely and Jandar tended to Ned’s wounds, and together with Fauss and Matrim we defeated this blob too. No more would it chase Scalrag or strike at poor Ned! Good had triumphed!

Bjorn arrived a few moments later. He seemed frustrated, perhaps that all the dessert had been eaten—for looking into the cavern ahead, all I could see were wet leathery eggs, and none of the puddings Scalrag had spoken of.

In any case, our trials were not yet at an end. Suddenly a massive hulking creature of umber angrily strode towards us from along a passage, its claws and sharp pincer-jaw clacking at us most threateningly. Scalrag, perhaps feeling nauseous from over-indulging at his sweets, looked woozy and stumbled towards us. I hurriedly quaffed a potion in the hopes of regaining my strength, while Jandar prepared to fight the thing.

It tripped and fell.

It hit its head on a rock, knocking itself unconscious.

Clearly the Gods favoured us this day, rewarding us both with pudding and now miraculous deliverance!

We chopped the creature up, with Fauss taking parts of shell and body for use in spells or armour.

And so we pressed on, finally coming to an underground lake in a large cavern. Light streamed in from above, through a round hole. The surface!

There was also a body hanging from a rope down the hole. We cut it free. Mosley and Scalrag felt the poor lad had not died from natural causes, or even from hanging. Something darker was afoot.

This was a mystery we would have to solve later, however. For now, we were all happy to climb up and out from the darkness below. Matrim told us that the land we were now gazing upon was his, having been won by him days before in a game of cardes. Looking upon the fallow, weed-strewn fields and bare, dying trees it was clear that luck had indeed smiled upon my friend. The barn alone was more magnificent than any shed I had slept in as a child at my father’s home.

And so it is that we returned to Gillian’s Hill. We will rest, and gather supplies. I will study the Big Picture Book of Fighting Scalrag gave me, in hopes of learning more of the martial arts. And when we have prepared and sharpened our blades and collected our provisions we will march on Dragonspear Castle and free Matilda and the others held there. 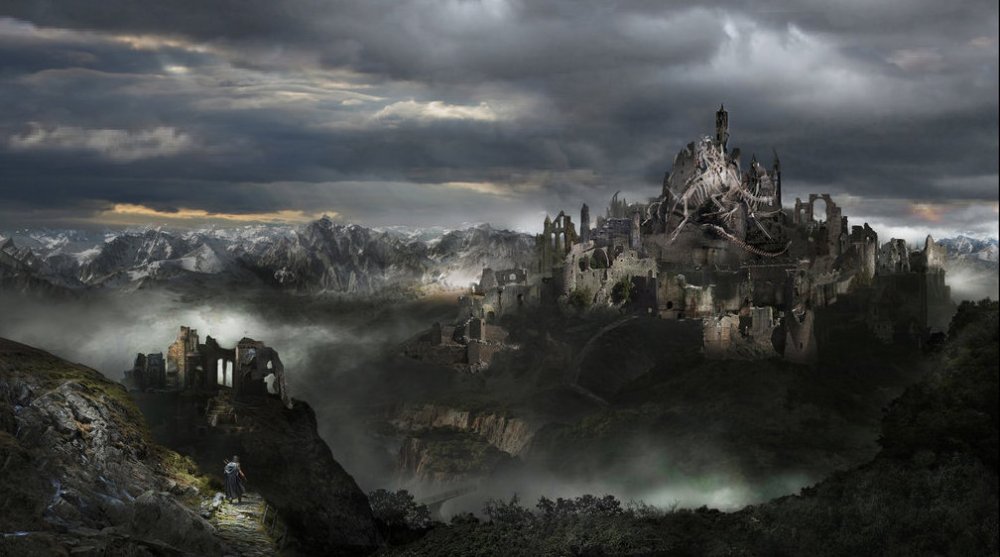